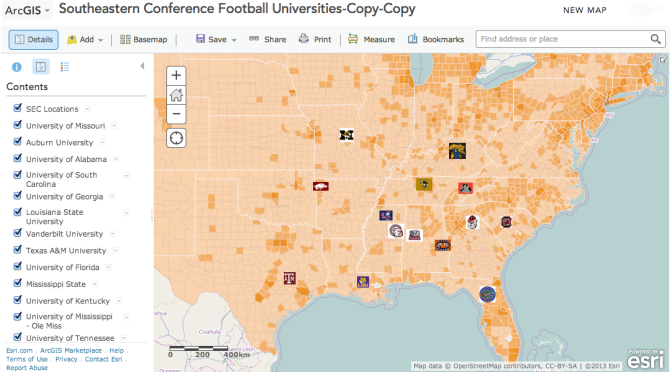 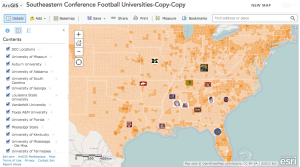 This was the first lab we were assigned in Principles of GIS. Since A&M was in its second official year in the Southeastern Conference, my professor had us make our own accounts with esri ArcGis. He then gave us a simple Excel sheet with the locations of all the universities in the SEC (football, you know). His requirements were that each school had to have distinct symbols, and of course a legend, and along with a base layer that was from esri’s options and then explain later to him why we chose the symbols and base layers selected.

Uploading the shapefile was fairly simple, as was providing each school with a different symbols. The snag resulted when I decided that I could give each school a very different symbol, such as, a picture of their mascot. At the time, this was fairly difficult, because I could not figure out how to provide these distinct symbols to the respective school as long as they were in the same layer. The symbol image change that ArcGIS has changes all of the points in the layer to the same image. So even though I was uploading a distinct image, I still failed to successfully upload and retain a different image for each school. In the end, the only solution I could figure out was to make separate layers for each school, and then upload each individual image for each school/layer. On that complicated note, I later was able to talk with some esri recruiters when they visited A&M. I explained the predicament I had found myself in and watched as a recruiter furrowed her brow and said, “There has to be an easier way.” I assured her I looked through every option and even went to the help and could notfind anything. If anyone has played with that, I’d like to hear what you did.

The base layer I chose was simply population density. I originally wanted to be a bit more out there and put the base layer that shows the levels of binge drinking, but then I chickened out, worrying my professor would find it inappropriate – though it may be worth noting that the levels were actually high in the areas corresponding to the schools. So I just went tame and put population density. In retrospect, my symbols are less helpful because of their shapes actually make it hard to see their county levels at this scale. And I had chosen this scale because I wanted him to be able to see all of the schools on the map. My first lab was so much easier than I had ever expected, and would ever have again though, and I’m thankful.

A geographer's musings on everything.