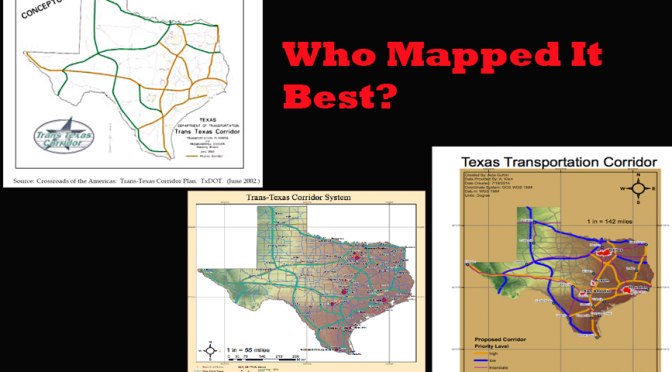 So, I was working on my preparation for my post about Lab 3, only to realize that I had erred: my Lab 2 map that I had posted was actually my Lab 3 map. Apparently, I had since deleted my Lab 2 map because it was poorly done. So I thought to myself, what now?

Since I have already pointed out all of the issues with the map you saw previously, I decided it would be fun to try and redo the map again. I looked up all the requirements my professor had for us, and pulled out the old data, and here we are, the new and improved Texas Transportation Corridor map: 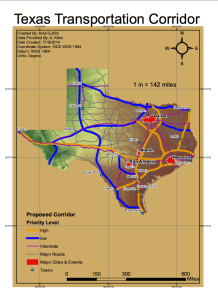 So, the requirements aren’t much different from what I described for my first Texas Transportation Corridor. I needed the following:

In my last map, all that marked the cities, major or not, were circles with varying sizes. I found myself choosing to represent the major cities this time with polygons of their areas, exactly for the proper display of their built up areas. For the major cities, I made sure to also bump up the text size and bold and add a small mask as well, so that way the names would stand out. I also minimized what I considered “major cities.” I originally hadnot only San Antonio, Houston, Dallas-Fort Worth and Austin, but Corpus Christi, Lubbock, and El Paso as major cities too. While these are certainly notable cities in Texas, they differ wildly in size when compared to the original four.

When I decided on the small towns I would include, I relegated Lubbock, El Paso, and Corpus Christi into that group. I chose the following cities for several reasons: they were either well known, near a junction of corridors, major roads, and interstates, or they were in an area where I had yet to include many cities to aid understanding of how areas may be affected. I included these reasons in the following list. 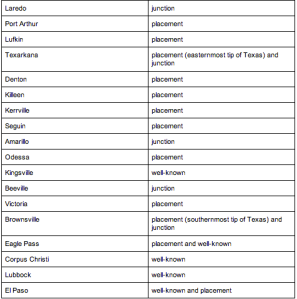 For the small cities, I simply used a light blue dot of the same size as representation.  The text size is smaller, and they aren’t bolded, although they do utilize Arial font. They also have a mask, because against that raster it is hard to get anything clear enough for reading.

When looking back on both my first version of this map, and the Department of Transportation’s map, I noticed that the DoT’s map had the corridors separated into two groups by color. This was originally unclear as to why for me, but once I dug through my data a little more, I found that they could be defined by priority, high or low. A google search later, I learned this meant the kind of traffic they handled. I agreed with DoT that this was important for map viewers to know and thus, my high priority roads are defined by a goldenrod color, while my low priority roads are defined by a sort of electric blue. I also bumped up their thickness to ensure they were clearly important. Interstates are a eye-catching but muted magenta and a little thinner than the corridors, with the major roads being a gray that’s even thinner, so not to draw from the most important map elements.

What I probably learned the most from doing this map over? The importance of making a plan before starting a map. I thought I was doing this by listing the requirements and noting why they were necessary, but I found myself wasting time on simple things like deciding what kind of a halo was necessary, what colors to use, and which cities were major cities. If I had taken the time to puzzle these all out before I started on the map, I wouldn’t have wasted so much time in ArcMap. Next map I make, there will definitely be a plan drawn up before I enter ArcMap.

So, what do we think? Improvement?

A geographer's musings on everything.